About The Author: Charles Dickens 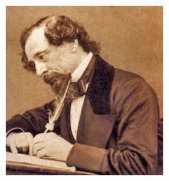 Charles Dickens
Charles’ Dickens Great Expectations is almost like an autobiography of his own life. Dickens uses his own life stories and experiences to implement into the life of his protagonist Pip as any good author does. As we will explore, there are many similarities between the life of Pip in Great Expectations and Charles Dickens’ own life.

Charles Dickens was born on February 7, 1812 and spent his childhood living in the coast marshes of Kent, England, in both the same place and time period that Pip had done. When Dickens was nine, his family moved to London, just as Pip too eventually did to pursue an education. Both Pip and Dickens had experienced a childhood of poverty and destitute. When Dickens was only twelve, his father John was put in debtors' prison. Dickens's mother moved his seven siblings into prison with their father, but the second-oldest Dickens was to live alone outside the prison and work with other young in a blacking warehouse for three months. This experience was extremely disturbing for Dickens as not only was the job itself dreadful, but Dickens felt himself to be too good for it. This reminds us of the same occurrence in Pip’s life when he worked as a blacksmith for Joe but hated the job and felt himself too good for it. After these three months, Dickens returned to his education and eventually became a law clerk, followed by a court reporter and finally becoming the novelist that we all know and love today. Perhaps the experience of being a law clerk had affected Dickens considerably, because he includes the law, justice and characters like Wemmick and Jagger who all revolve around this idea as vital components of Great Expectations. As a novelist, Dickens experienced tremendous success at the young age of only twenty-five when he published his first novel. This reminds us of Pip’s wealth and success also at a young age in London. When Dickens was 46, he separated from his wife with whom he had 10 children with to develop a relationship with an actress named Ellen Ternan. Dickens continued to write novels for the remainder of his life, becoming a well-known and admired figure in literature. Dickens’ died in 1870 of a stroke, having lived a short but most fulfilling 58 years.

Both Great Expectations and Dickens’ own life took place in the early Victorian England and Industrial Revolution time period, which has set one of the most prominent themes as social class. This was a time where great social changes took place and where the divisions between the poor and the rich were extremely widespread. The manners of the upper class were very strict, and all of the ladies and gentlemen required the traditional education to be truly accepted as a “gentleman” as we are constantly reminded throughout the novel. These conditions characterized the settings of Dickens’ life, which consequently was present in Great Expectations. Pip’s sudden rise from blacksmith to educated gentleman forced him to climb the social class ladder and assimilate to a whole different set of rules and expectations, just as Dickens may have also experienced. Ironically, this novel about the wealth and social class was most likely written out of Dickens’ economic necessity at the time. As we all know, this book is still immeasurably popular a hundred and fifty years later and will most likely continue to be so.