Two summaries of Dickens' Great Expectations are provided below.

If you would just like to familiarize yourself with the main plot, please read the:
If you would like to get a more in-depth description, please scroll farther down 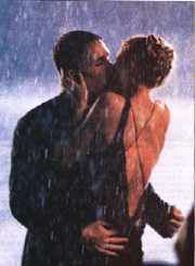 Pip and Estella
The narrator, Pip recounts his life story from his childhood to how he matures and grows up to becoming a young man. Throughout this transformation, one thing remains unchanged. Pip falls in love with a wealthy but heartless girl named Estella. From that moment on, everything Pip does in his life is no longer for himself or anyone else but for Estella and only her. Pip even receives a fortune from a secret benefactor to pursue an education and he does this along with obtaining wealth, success and high social class in the hopes of becoming worthy in the eyes of his beloved Estella. 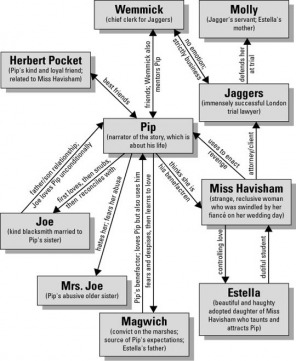 The Main Characters
The novel starts out with one of the most significant events of Philip Pirrip (Pip)’s life when he is a young child. As he was sitting one evening, looking at his parents’ tombstones, an escaped convict violently grabs Pip, ordering him to bring food and a file. Even though Pip does everything he is asked, the convict gets caught anyways. Pip returns to living the normal, tranquil life with his older sister and her husband, Mrs and Mr. Joe Gargery in Kent, England. Soon, however, his Uncle Pumblechook takes him to the Satis House where he meets the strange but wealthy Miss Havisham, who had been stood up at her own marriage, and her beautiful adopted daughter Estella. This is the girl that Pip falls madly in love with from the moment he meets her and will continue to do so throughout the rest of his life even though she treats him with only contempt and hostility. Soon Pip learns to be a blacksmith from his brother-in-law, Joe, though he is completely unhappy as Estella mocks him for being such a common labourer. One night, his sister, Mrs. Joe is viciously attacked and will only be able lie in bed until her death so a nice young girl named Bitty is hired to take care of her. Pip uses this opportunity to ask her to teach him all that she knows academically so that he can better himself in the eyes of Estella.

Before long, a lawyer named Jaggers alerts Pip of a large sum of money that had befallen him from a secret benefactor and urges him to travel to London to start his education and pave the way to becoming a “gentleman”. Pip, already thinking of Estella, is delighted at his good fortune and believes that he owes this to Miss Havisham who wants to promote his social status. In London, he makes friends with two gentlemen named Herbert Pocket and Wemmick while receiving a good education. Pip continues to pine after Estella but expresses disdain for his former loved ones like his once beloved Joe. Pip becomes successful, wealthy and well respected over the years, gaining everything he had ever wished to be as a child except at gaining the love of Estella. Many years pass until one particular night when his former convict, Magwitch, returns to Pip, dramatically announcing his identity as Pip’s secret benefactor all these years. Pip shows his utter disgust at this turn of events but agrees to help Magwitch escape, as he is still wanted by the police. As time goes on, Pip begins to genuinely care for Magwitch.

Another twist is discovered by Pip when he realizes Magwitch is the birth father of Estella and that Miss Havisham had never wanted to encourage Estella’s love for Pip but rather persuade her to “break men’s hearts”. Pip is utterly heart-broken when he hears of news that Estella had married Bentley Drummle, a cruel upper-class gentleman. Pip visits Miss Havisham one last time before her death where she asks for his forgiveness and he agrees despite all the pain that he has suffered. Magwitch must escape before time runs out and so Pip and his friends sneak him down the river to catch a ship but is ultimately caught by the police and Magwitch suffers severe injuries that he later succumbs to. Pip returns to his regular lifestyle focusing on his career before returning many years later to the Satis House where he had first met Estella. Once again, Estella and Pip meet in the garden when Estella informs him of the death of her husband and the cruelty that Drummle had treated her with over the years of their marriage. Pip recognizes that Estella’s once cold and bitter eyes have turned warm with compassion as she asks for his forgiveness. He accepts and they walk out of the garden hand in hand, while Pip believes that they will never be apart ever again.